Abstract:
5G networks have now entered the phase of deployment. Since the first 5G architecture release, Network Slicing is in the heart of the novel concepts to support the new envisioned services’ diverse requirements, such as autonomous driving, Unmanned Aerial Vehicles (UAV), Augmented and Virtual Reality (AR/VR). In this talk, I will shed light on the status of Network Slicing, where we are in terms of technological evolution and current trends, and the remaining issues. 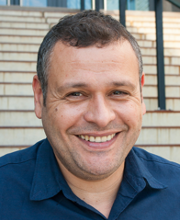 Adlen Ksentini is a COMSOC distinguished lecturer. He obtained his Ph.D. degree in computer science from the University of Cergy-Pontoise in 2005, with a dissertation on QoS provisioning in IEEE 802.11-based networks. From 2006 to 2016, he worked at the University of Rennes 1 as an assistant professor. During this period, he was a member of the Dionysos Team with INRIA, Rennes. Since March 2016, he has been working as a professor in the Communication Systems Department of EURECOM. He has been involved in several national and European projects on QoS and QoE support in future wireless, network virtualization, cloud networking, mobile networks, and more recently on Network Slicing and 5G in the context of H2020 projects 5G!Pagoda, 5GTransformer, 5G!Drones and MonB5G. He has co-authored over 120 technical journal and international conference papers. He received the best paper award from IEEE IWCMC 2016, IEEE ICC 2012, and ACM MSWiM 2005. He has been awarded the 2017 IEEE Comsoc Fred W. Ellersick (best IEEE communications Magazine’s paper). Adlen Ksentini has given several tutorials in IEEE international conferences, IEEE Globecom 2015, IEEEE CCNC 2017, IEEE ICC 2017, IEEE/IFIP IM 2017. Adlen Ksentini has been acting as TPC Symposium Chair for IEEE ICC 2016/2017, IEEE GLOBECOM 2017, IEEE Cloudnet 2017 and IEEE 5G Forum 2018. He has been acting as Guest Editor for IEEE Journal of Selected Area on Communication (JSAC) Series on Network Softwerization, IEEE Wireless Communications, IEEE Communications Magazine, and two issues of ComSoc MMTC Letters. He has been on the Technical Program Committees of major IEEE ComSoc, ICC/GLOBECOM, ICME, WCNC, and PIMRC conferences. He acted as the Director of IEEE ComSoc EMEA region and member of the IEEE Comsoc Board of Governor (2019-2020). He is the chair of the IEEE ComSoc Technical Committee on Software (TCS).